by Brandon Hamber and Eliz McArdle
In December 2015, the United Nations Security Council adopted Resolution 2250 a landmark resolution recognising young people’s positive role in conflict and post-conflict settings. The UN Secretary-General Antonio Gutteres commissioned a global study on youth and peacebuilding entitled “The Missing Peace” authored by Graeme Simpson, which was presented to the Security Council and then the UN General Assembly in 20181. The report calls for a move away from a deficit model that sees young people as a threat to security. A key message is the importance of recognising and supporting young people as positive contributors to peace. Building on this report, the UN has continued to promote a Youth, Peace and Security (YPS) agenda.

As a contribution to the YPS agenda, the Ulster University authors of this article initiated the Youth, Peace and Security Leadership Series with partners The John and Pat Hume Foundation, the International Fund for Ireland (IFI), and the global peacebuilding organisation Interpeace. The main aim behind the series is to connect Northern Ireland youth work with the global YPS agenda. The specific objectives are to raise the visibility of the role that young people can and do play in peacebuilding and to build local capacities in terms of YPS and leadership.

Launched in March 2021, four public seminars have taken place so far, with 620 attendees across the events. The series has featured young leaders as speakers from Northern Ireland, Libya, Somalia, former Yugoslavia and Sri Lanka (seminars on YouTube). Graeme Simpson, author of the “The Missing Peace” Report, played a crucial role in identifying the international youth leaders who emerged during the report’s development.

Although the seminar turnout has been heartening, awareness-raising alone is limited as it requires those in positions of power to listen and take young people’s work seriously. For this reason, the seminar series has also utilised a capacity-building component using closed facilitated dialogue between youth workers and local and global peer leaders. The seminar series has effectively coupled the public online seminars with private dialogue sessions.

However, meaningful engagement with and between young people requires time and investment. Before the private dialogues, we worked with individual young leaders to help them plan and prepare to meet other local and global young leaders, focusing on the specific seminar themes (e.g. women and Peacebuilding, methods of youth work). Once ready for the private session, a closed meeting between young people from Northern Ireland and border counties and the global peacebuilders took place.

While there was some initial anxiety about being in the spotlight with adult spectators watching, a curated, private and facilitated approach helped to mitigate any concerns and gave space for the participants to voice their opinions. This approach resulted in a rich discussion and helped identify issues that could be taken to the public seminars. 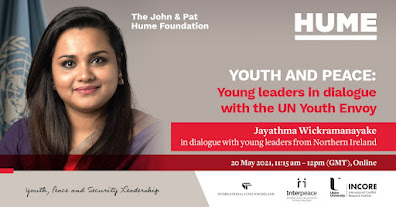 One of the most notable of these private sessions was with the UN Secretary General’s Envoy on Youth, Jayathma Wickramanayake, who met with 23 young people online for a private session before the public seminar. Prior to meeting the UN Envoy, young people in Northern Ireland and border counties explored the theme of the role of youth in peacebuilding.

In the private session, participants shared perspectives on the leadership acts and actions they undertake and their visions for peace. The UN Envoy helped link their work and the global YPS agenda. The meeting was valuable in discussing strategies for addressing YPS issues and local youth workers and participants said that they felt affirmed by being listened to by the UN Secretary General’s Youth Envoy. The participants then took this learning into the public seminar that followed.

Overall, a considered dialogue ensued in all the private sessions and public events. Global and local considerations were interwoven with a respectful listening and sharing tone. The presence of outsiders with different perspectives was valuable. There is little doubt that the eminence of the global young peacebuilders was important for the local young people. Activism was stimulated by interacting with international YPS advocates.

This type of international sharing was the hallmark of many earlier programmes during the peace process in Northern Ireland and Ireland but has decreased in the last few years. The experience of the YPS Seminar Series suggests it is vital to support this type of work. Northern Ireland and Ireland has much to share and gain from being more centrally keyed into global processes such as the YPS agenda.

This article was first published in Fund Focus, The Newsletter of the International Fund for Ireland, September 2022.

Eliz McArdle is a Lecturer in Community Youth Work at Ulster University and Course Director for the Certificate in Youth Studies with franchised partner, YouthAction Northern Ireland. She is member of the Centre for Youth Research and Dialogue at Ulster University.
Posted by Brandon at Monday, November 14, 2022 No comments:

Hamber, B. & McCardle, E. (2022). Youth, Peace and Security: Fostering local and global exchange. Fund Focus: The Newsletter of the International Fund for Ireland, September 2022.
Posted by Brandon at Thursday, September 15, 2022 No comments:

The Problem with Men? The Challenge of Violent Masculinities in a Changing World

On 5 August 2022, I delivered the PJ McGrory Public Human Rights Lecture as part of the Féile an Phobail.
The lecture discussed masculinity in a global landscape of rising national fervour, armed conflict, gender-based violence, pandemics and endemic inequalities. It explored the link between violent masculinities and inter-personal, community and political violence and instability, while calling for new understandings of masculinities that can disrupt dominant narratives and lead to positive social change. 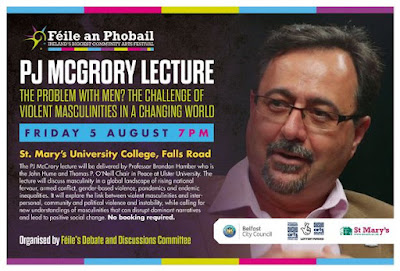 Posted by Professor Brandon Hamber at Friday, August 05, 2022 No comments:

The Problem with Men? The Challenge of Violent Masculinities in a Changing World

Posted by Professor Brandon Hamber at Friday, August 05, 2022 No comments:

Localising Memory and Reinventing the Present

"Youth, Peace and Security:  Psychosocial Support and Societal Transformation" published by Brandon Hamber; Denis Martinez; Marlies Stappers; David Taylor; and Thomas Unger is now available online.
This paper explores the key issue of mental health and psycho-social services (MHPSS), from a youth-specific perspective. Drawing on the assertions and recommendations of the YPS Progress Study, and coupled with the increasing attention to MHPSS within the sustaining peace agenda, this policy brief pays special attention to the role of youth-specific psycho-social services as a vital dimension of transformative youth resilience, essential to both addressing the consequences and prevention of violent conflict.
This is a report commissioned by Interpeace for their Outside the Box: Amplifying youth voices and views on Youth, Peace and Security (YPS) policy and practice series.
Download the Report

Watch a Video Summary of the Report

Posted by Professor Brandon Hamber at Monday, May 02, 2022 No comments: