BBC Archive on the Troubles

On 8 November 2019, I worked with the BBC Rewind team to launch on the Magee Campus the Ten Chapters Of The Northern Ireland Troubles. The Ten Chapters, produced by the BBC Rewind editorial and technology team, is an online, multi-media series of episodes covering the conflict in Northern Ireland from the 1950s to the 1990s. As part of the launch a workshop was run with 14-22 year olds from the City. The BBC project came about as a result of discussions with the INCORE/CAIN project teams at Ulster University and Queen's University Belfast, and as part of the tripartite agreement between the BBC and the academic institutions. 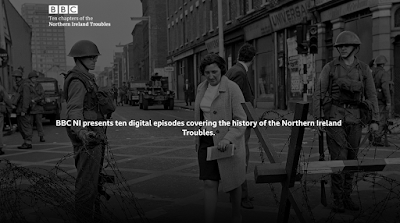 Click here to check out the Archive
Posted by Brandon at Saturday, November 09, 2019 No comments:

The lastest screenings of the Screening Violence Project took place in Dungannon on 7 November 2019, with the support of the Dungannon Film Club, showing two Argentinian films followed by a discussion with participants.

The films shown were "Padre/Father" (Director Santiago Bou Grasso), a short stop motion animation piece that portrays the day-to-day life of a woman who looks after her bedridden military father. The second film was "Who am I?/Quién soy yo?"(Director Estela Bravo), a documentary about the stolen babies of the 1976-83 military dictatorship in Argentina who have recovered their true identity. Needless to say, the films provoked an interesting discussion.

The Argentinian animation can see below, and if you further questions on the project or want to participate contact me.

PADRE from opusBou on Vimeo.

The Chair has continued work on AHRC Project "Screening Violence: A Transnational Study of Post-Conflict Imaginaries" with partners in Newcastle and Bristol University, and works with co-investigators and partners in Algeria, Argentina, Colombia, Northern Ireland and Indonesia.
Posted by Brandon at Thursday, November 07, 2019 No comments: