Bloodsucking is all the rage

The world seems hooked on vampires – Buffy the Vampire Slayer, Blade the Vampire Executioner, Tom Cruise the Sultry Vampire, and the recent teenage angst-filled vampires in Twilight. I even admit to being slightly addicted to the stylised yet freaky TV series True Blood, which sees humans and vampires attempting to coexist in the deep south, in the US.

But why the obsession?

Firstly, the entire myth of vampires revolves around one thing – blood. Blood is a metaphor for so much about humanity: life, love, kinship, family, health, disease and death. Creating a fantasy creature whose raison d’être is blood is a recipe for human fascination. Throw in struggles between light and darkness, and good and evil, and the scene is set for decades of enthralment.

Secondly, vampires are, generally loners trapped between the worlds of the living and the dead. It is no wonder hapless and pale teenagers wondering bedraggled about town in Gothic black can relate to them. Vampires make being an outsider cool and charming with a hint of danger.

Finally, vampires have a mysterious sexual magnetism. Vampires are tall, dark and handsome, or curvy, well proportioned and buxom. Short, dumpy and pimply vampires are few and far between. For mere mortals, vampires offer the hope of transformation, not only to something menacingly sensuous but, if all else fails, you can turn yourself into a bat and flutter off into the night.

So vampires give us something. They offer an escape from mediocrity, and no matter how disconnected or estranged from the world we feel, vampires offer a road to romantic immortality for a few minutes of neck pain and a pint of blood.

All this highlights what a fickle bunch we humans are, and how hard we are to please. In the words of James Bond, the world is not enough for most people. Instead of making the most of the here and now on earth, many people seem to prefer to escape into the sinister supernatural world.

Of course, there is nothing wrong with a bit of entertaining escapism, but I am concerned that playful fantasy has turned into fixation. Searching the Internet, for example, for ‘vampire’ is scary business. There are people out there who think they are vampires, coming out only at night, drinking blood and filing their teeth into fangs for maximum effect.

At the risk of setting myself up for being mauled by a clan of angry wannabe vampires, this strikes me as decidedly ridiculous. Giving up garlic bread is one thing, but thinking you need to flee into a dark otherworld and be surrounded by haemoglobin-hungry nonhumans is just absurd, particularly when the real bloodsuckers are all around us – junk food peddlers who lure children in with toys made by underpaid workers in China; software companies that bring out new versions of software that do more or less the same thing but are not backwardly compatible, forcing us to buy upgrades; food producers who stuff animals with hormones for profit; psychics who use their so-called talents to make money rather than prevent terrible things from happening; ‘cheap’ airlines that are not cheap and keep inventing new ways to take your money; companies that sell extended warranties for goods already guaranteed; lawyers and consultants who charge by the second; private hospitals that bill for each swab; companies that pillage the environment and claim to be green; and, of course, who can forget bankers who have still not learnt their lesson and continue to get fat payouts? And don’t get me started on politicians’ expenses.

So forget the life of a night crawler – you can have just as much fun during the day and, what is more, you don’t even have to file your teeth into fangs. When it comes to being sucked dry of your cash, any old gnashers will do.

This article by Brandon Hamber was published on Polity and in the Engineering News on 13 November 2009. as part of the column "Look South". Copyright Brandon Hamber.
Posted by Brandon at Friday, November 13, 2009 1 comment:

My book launch in New York 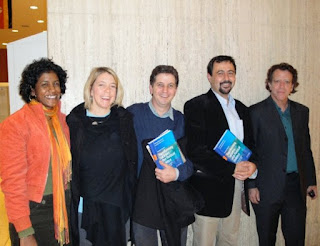 My book launch in New York on 11 November 2009 went really well in New York. A "conversation" about the book with about 50 people. Also inputs from Graeme Simpson, Ruti Teitel, Alastair Ager. Chaired and organised by Jack Saul (thanks Jack). Great to also see some CSVR people.
Posted by Brandon at Wednesday, November 11, 2009 No comments: