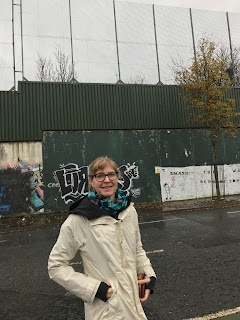 In December 2017 Professor Erin Baines, Associate Professor at the School of Public Policy and Global Affairs (SPPGA) at the University of British Columbia, visited Belfast.

The purpose of the trip was to explore ongoing partnerships and also engage with Ulster University MSc, LLM and PhD students. Professor Baines offered two classes on focusing on her work in Uganda entitled "Children & Futurities" and a second research focused workshop entitled "De-colonial approaches to research on violence".

We also got some time to do some writing, and wider than this her and I outlined some future plans for joint co-operation and research. I look forward to continuing to work with her.

Launch of "John Hume: In His Own Words"

Great to be at the launch of  "John Hume: In His Own Words" edited by Seán Farren. The event was hosted by Four Courts Press in association with Ulster University. Pat Hume was the keynote speaker providing many useful and detailed insights into her and John Hume's work. I spoke about the importance of peace and Hume legacy.

Reflecting on Masculinities Through the Eye of the Needle

The Textile Language of Conflicts Exhibition launched today (6 November 2017) at the Magee Campus, Ulster University. The exhibition was curated by Roberta Bacic and organised by Professor Robinson. I gave the keynote address at the opening entitled "Reflecting on Masculinities Through the Eye of the Needle". The talk can be listened to below.

Recently I spoke at the 29th Annual Nobel Peace Prize Forum (September 2017) at Augsburg University in Minneapolis. At the Forum he presented the paper "Cultivating Peace: An Exploration of the Role of Nature-Based Activities in Conflict Transformation". This was a joint paper by myself, Alistair Little and Wilhelm Verwoerd. Little and Verwoerd belong to ‘Beyond Walls’ which organised ‘the Journey through Conflict’ process in the framework of ‘Sustainable Peace Network’. 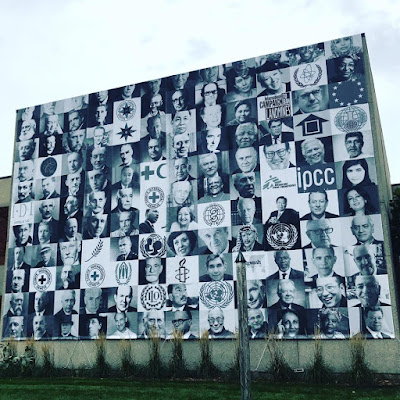 Posted by Professor Brandon Hamber at Saturday, September 30, 2017 No comments:

Yesterday I was lucky enough to attended a meeting of the Women, Peace and Security Oversight Group in Dublin discussing Ireland's National Action Plan. I spoke on issues of masculinity and inclusion in women, peace and security agenda. The Minister for Foreign Affairs and Trade, Simon Conveney, attended for some of the time [Photos from Irish Foreign Ministry Twitter] #wpsireland 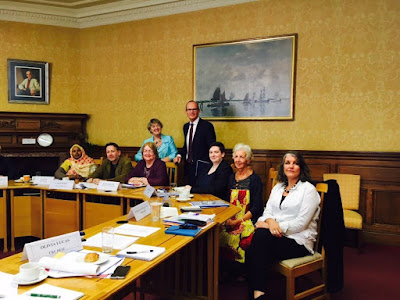 Posted by Professor Brandon Hamber at Thursday, September 07, 2017 No comments: 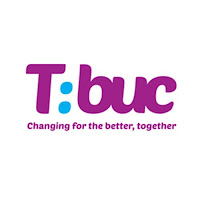 My with Grainne Kelly continued in 2017 focused on the concept of reconciliation. In 2017 they spoke at two high-level events in Northern Ireland. The first with The Executive Office and staff as they consider the role of reconciliation in the draft Programme for Government and Together: Building a United Community (TBUC). They participants and delivered the keynote address at a further seminar at the “Together: Building a United Community Engagement Forum” on 15 June 2017, with the Executive Office (TEO) and over 160 community practitioners, policymakers and academics that took place at the Girdwood Community Hub.
Posted by Professor Brandon Hamber at Saturday, June 17, 2017 No comments:

It was a pleasure hosting the Seminar "Resilience to Conflict - A New, Integrated, Granular Measure" by Dr David Backer (University of Maryland) working with community partners Healing Through Remembering on 25 May 2017. The seminar explored the issue of resilience, an important topic in peacebuilding and international development.The seminar was part of a new formal partnership between Ulster University and the University of Maryland. Watch the seminar below.

Posted by Professor Brandon Hamber at Saturday, May 27, 2017 No comments:

In Mid-May 2017 I visited Uganda again as part of the Summer Institute focusing on “Men’s and Women’s Relations in Coercive Settings” (17-19 May 2017) hosted by the Refugee Law Project (RLP) and in War Partnership (CSiW). As part of the event I participated in a 2-day long workshops run by RLP and partners with men who were former combatants/abducted during the Northern Uganda war to learn from their experiences. The second part of the event was a more open conference focusing on women’s and men’s experiences of forced relationships in wartime. I am most gratfeul to Dr Chris Dolan and Professor Erin Baines for the opportunity to attend, learned a fortune.

Posted by Professor Brandon Hamber at Wednesday, April 19, 2017 No comments:

In March 2017 a delegation from Sierra Leone including the Minister of Local Government and Rural Development, Maya Kai Kai, visited Belfast. The visit was the result of my visit to Sierra Leone in February 2016 on invitation of Catalyst for Peace (operational US Foundation) and Fambul Tok a local NGO. The trip focused on observing the work of Fambul Tok. Fambul Tok (meaning "family talk") is a community ritual process that takes place at bonfires in which reconciliation between victims and perpetrators of political violence takes place (see http://www.fambultok.org).  When the Ebola crisis hit, the same networks were used for post-war reconciliation were transformed into health prevention networks. Then in the last two years the networks have continued to develop, and have morphed into a local governance processes called the “People’s Planning Process”. Fambul Tok have run this new peace and development process in 3 regions. Through the trip I was invited to be an advisor to and Fambul Tok, as they set out to mainstream the process with government. As part of this process, funded and supported by Catalyst for Peace, Ulster University hosted a delegation from Sierra Leone including the Minister of Land and Rural Development, MPs, a major, local council members and various civil society representatives in Belfast in April 2017 to discuss the inclusive local governance and peacebuilding process unfolding in Sierra Leone.
Posted by Brandon at Friday, March 31, 2017 No comments: 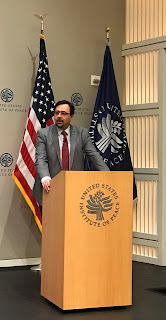 Posted by Professor Brandon Hamber at Monday, March 13, 2017 No comments:

A report from BBC Good Morning Ulster on a visit of INCORE Ulster University MSc and HECUA students visit to Stormont shortly after the 2017 election.

Posted by Professor Brandon Hamber at Wednesday, March 08, 2017 No comments: