The Clinton International Summer School, in partnership with the INCORE Summer School at Ulster University, is an intensive scholarship program for university students from post-conflict and developing regions. The curriculum is designed to promote entrepreneurship, leadership and community engagement, and prepare the students to advance positive change and economic development in their home communities. The program provides the participants with a unique opportunity to experience first-hand Northern Ireland’s historical conflict and that region’s continuing road to reconciliation, peace and prosperity.

The 2015 module, taught by myself, Stephen Ryan and John Peto, describes and evaluates the impact that new technologies, in areas such as education, medicine, security and communication, have on peace strategies and conflict transformation. The programme is complemented by a 3 study visit to Belfast and various sites in Northern Ireland meeting local groups, peacebuilders and entrepreneurs. Check out the video below about the summer school.

The Good, Bad and Ugly: What lessons can we share?

It is hard to believe that the Belfast or Good Friday Agreement was signed some 17 years ago. Despite the passage of time, many countries in conflict continue to look to Northern Ireland as a model for their contexts. 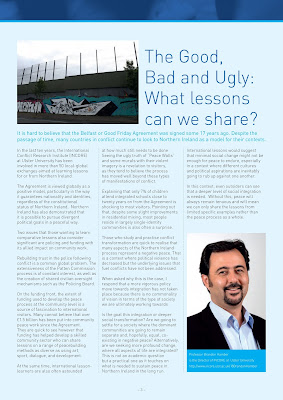 In the last ten years, the International Conflict Research Institute (INCORE) at Ulster University has been involved in more than 50 local-global exchanges aimed at learning lessons for or from Northern Ireland.

The Agreement is viewed globally as a positive model, particularly in the way it guarantees nationality and identities, regardless of the constitutional status of Northern Ireland. Northern Ireland has also demonstrated that it is possible to pursue divergent political goals in a peaceful way.

Two issues that those wanting to learn comparative lessons also consider significant are policing and funding with its allied impact on community work.

Rebuilding trust in the police following conflict is a common global problem. The extensiveness of the Patten Commission process is of constant interest, as well as the creation of shared civilian oversight mechanisms such as the Policing Board.
On the funding front, the extent of funding used to develop the peace process at the community level is a source of fascination to international visitors. Many cannot believe that over £1.5 billion has been put into community peace work since the Agreement.

They are quick to see however that funding has helped develop a skilled community sector who can share lessons on a range of peacebuilding methods as diverse as using art, sport, dialogue, and development. At the same time, international lesson- learners are also often astounded at how much still needs to be done. Seeing the ugly truth of “Peace Walls” and some murals with their violent imagery is a revelation to visitors, as they tend to believe the process has moved well beyond these types of manifestations of conflict. Explaining that only 7% of children attend integrated schools close to twenty years on from the Agreement is shocking to most visitors. Pointing out that, despite some slight improvements in residential mixing, most people reside in largely single-identity communities is also often a surprise.

Those who study and practise conflict transformation are quick to realise that many aspects of the Northern Ireland process represent a negative peace. That is a context where political violence has decreased but the underlying issues that fuel conflicts have not been addressed.

When asked why this is the case, I respond that a more vigorous policy move towards integration has not taken place because there is no commonality of vision in terms of the type of society we are ultimately working towards. Is the goal thin integration or deeper social transformation? Are we going to settle for a society where the dominant communities are going to remain separate and, hopefully, equal, co- existing in negative peace? Alternatively, are we seeking more profound change, where all aspects of life are integrated? This is not an academic question but a practical one as it touches on what is needed to sustain peace in Northern Ireland in the long run.

International lessons would suggest that minimal social change might not be enough for peace to endure, especially in a context where different cultures and political aspirations are inevitably going to rub up against one another. In this context, even outsiders can see that a deeper level of social integration is needed. Without this, peace will always remain tenuous and will mean we can only share the lessons from limited specific examples rather than the peace process as a whole.

Conference: Peace in the Basque Country