What does peace mean in the South?

Widespread relief greeted the 1998 Good Friday Agreement when over 94% of people in the Republic of Ireland voted to give up the territorial claim to the whole island enshrined in the Constitution until such time as there was a consensus to do otherwise. The desire to end the conflict was strongly endorsed in both jurisdictions, sustained by a dogged and consistent commitment to peace by the then Taoiseach, Bertie Ahern – a fact now buried, for the time being at least, under the debris of the current economic crisis.

The Southern reaction to the Peace Process varied depending on how closely affected by the conflict you were. For those living in the border region, the disappearance of the British Army and the opening of border roads, facilitating ease of movement between towns and villages whose hinterlands and livelihoods had been disrupted by the violence, was greatly welcomed.

Cross-border cooperation in tourism, infrastructure, policing and community development, all boosted by EU Peace funding, has allowed fractured communities to pick up the pieces and start again. For many Protestants in the Southern border counties, there was encouragement to engage in public life again after an ‘eyes down, mouths shut’ policy of trying to survive in a climate of fear and intimidation in a region deeply affected by the violence across the border. Many today continue to live with the residue of that.

The further south or west you travelled, it was hard to believe that the peace process meant anything more than an escape from the nightly violence beamed into living rooms and the interminable discussions about a solution. And of course for others, their interest didn’t extend further north than Sainsbury’s in Newry or Asda in Enniskillen. For a small minority the Agreement was seen as a sell-out.

To read the rest of the article by Barbara Walshe visit 15 Years On.
Posted by Professor Brandon Hamber at Wednesday, March 27, 2013 No comments:

I recently had the pleasure of speaking at the Basque Social Forum to Promote the Peace Process, bakebidea.com. I was asked to speak about Dealing with the Past. 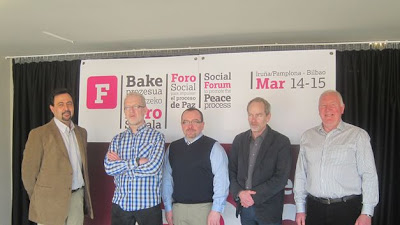 Below is my Tweet record of my talk. Obviously, a summary but core ideas contained.

Posted by Professor Brandon Hamber at Monday, March 18, 2013 No comments:

Email ThisBlogThis!Share to TwitterShare to FacebookShare to Pinterest
Labels: Basque Country, Basque Peace Process, Dealing with the Past, Healing Through Remembering

Negotiating a peace agreement in a conflict society provides several challenges. First, you need to create a constructive process; second, you need to ensure that the proposals mean something to everyone at the table and third, you have to ensure that what is agreed gets implemented. It could be argued that the Northern Ireland process was a fairly inclusive one, and the Belfast/Good Friday Agreement was a fairly comprehensive one. But what does the aftermath of the agreement look like?

When George Mitchell told the negotiators on Good Friday in 1998 that ‘the hard work starts now’ he meant that implementing the agreement in the spirit in which it was signed would indeed be hard work. And making it work has been like trying to tattoo a balloon. The perceived gains and losses have to keep pace with each other – otherwise some will accuse others of overplaying their hand. So a peace agreement often hangs on the undertakings it makes. But where there is a clash of interpretations about how these should be fulfilled then a feeling of bad faith can quickly replace the more clear-eyed view of the future, such as the one promised on that Good Friday.

To read the rest of the article by Monica McWilliams visit 15 Years On.
Posted by Professor Brandon Hamber at Friday, March 08, 2013 No comments:

Very excited today about the launch of the INCORE and CAIN Memorials App.

The App acts as a guide to the hundreds of Troubles memorials found in public spaces in Northern Ireland.

As is noted on CAIN: "The new Memorials App provides an interactive guide to the physical memorials allowing users to view information and photographs about each plaque, memorial stone, memorial enclosure or garden, and/or figurative statue, that has been erected in a public space during the conflict. Users can search on-line databases for memorials of interest. Alternatively they can use the geo-locating facility of the iPhone to find memorials that are close to their location. Users can also find basic information on those people commemorated by the memorial".


Posted by Professor Brandon Hamber at Monday, March 04, 2013 No comments:

Where is our Civic Forum?

Back in the mid-1990s, long before politicians were elected to the Assembly, a broad-based group of people nominated by 10 different political groupings worked long and hard to start the negotiations which eventually led to the Belfast/Good Friday Agreement. Pledges were made that each and every one of its many important provisions would be implemented. And many of them have been.

What we have not seen is the same effort given to the establishment and maintenance of the consultative Civic Forum. The inclusion of a Civic Forum on page 9 of the Belfast Agreement is not a ‘maybe’ or a ‘might’; it is a ‘will’.

This consultative body was designed to be an important ‘sounding board’ between the people and the politicians: the place where strongly held opinions from across our many divides could be aired and shared, and where contentious issues around identity, cultural expression, sectarianism, diversity, social justice, social policy and building of community could be discussed.

It would be a place where people could hear each other’s ‘bottom lines’, particularly on the most contentious issues -- such as policing, parades and flags – in the hope that through such sharing the politicians might learn to take account of those ‘bottom lines’ when formulating policy. It was an effort to inject some consensus politics into a society ridden with divisive identity politics.

To read the rest of this article by Anne Carr, visit 15 Years On.
Posted by Professor Brandon Hamber at Friday, March 01, 2013 No comments: