Always take the weather with you

What would we do without the weather? When unsure what to speak about or write about, for that matter, there’s always the weather. When conversation dries up, you can seek safety in a discussion about a climatic disaster. As singer Tom Waits says, “strangers talk about the weather”.

Before I moved to the northern hemisphere, I never knew the significance of the weather or that it could be such a large part of daily discussion. People talk about it all the time. But it is not only strangers who use it to break the ice. Everyone spends time analysing the weather and, after enduring a few winters here, I know why. The weather is so foul you are forced to consider its impact. Of course, it is not all dreadful. On the odd day in July, the sun can shine and temperatures can occasionally sneak up to 25 ?C. These days are generally marked by two occurrences. Firstly, the streets are transformed into a riot of colour that ranges from transparent white flesh through to sunburned lobster-red flesh. Secondly, good weather is greeted with a flurry of capitalist zeal. People rush out to buy new braais or barbecues, along with matching garden furniture and other garden knickknacks from gnomes to cheap Japanese water features. 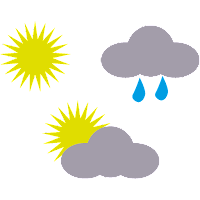 These two phenomena can easily be explained. The former is about relative deprivation. The latter is the product of what psychologists call interval reinforcement. Behavioural psychologists can get a pigeon to peck a disc when rewarded with food. Interestingly, you can get a pigeon to peck consistently either by rewarding and reinforcing its behaviour after a standard number of pecks, or by only occasionally rewarding it at average variable intervals. The potential reward is enough to get the creature to peck unrewarded, no matter how irregular or limited the reward is. This is why gamblers gamble, and why having the odd warm day can get people to buy a ton of outdoor equipment that will invariably rust in the rain for the rest of the year. In fact, the more you think about it, the world works like this all the time. We vote for politicians who only occasionally carry through their promises. We buy lottery tickets because someone wins every now and then. Despite such rewards being largely erratic, we con ourselves into believing that they are predictable. We even invent things to make us feel the world is explainable. When it comes to weather, it is the TV forecast that is the technology that leads us down this path of compulsive behaviour.

There are two types of people in the world – those that watch the forecast and those that do not. Watching the weather forecast in the northern hemisphere is as pointless as taking water skis with you on a camel safari in the Sahara. The forecast varies largely between dull, rainy and grey, and rainy, grey and dull. Forecasting warm days is equally as pointless, as it only leads to irrational social behaviour, as I explained. Of course, the forecast can be helpful in predicting major disasters but, on a day-to-day basis, it is reality TV for the clinically inane and groundlessly optimistic. I think we should return to the good old days when weather watching actually involved nature and an interaction with the world beyond plastic graphically-represented clouds

So this is what I have learnt in these northern climes: if cows are lying down in a field, it is going to rain; if swallows are flying backwards, there is a fierce wind, and if your cat bolts across your garden seemingly being pelted with golf balls, it is probably hailing. More importantly, you just have to take the weather as it comes while paying heed to the wise words of Billy Connolly: there is no such thing as bad weather, only the wrong clothes.

This article by Brandon Hamber was published on Polity and in the Engineering News on 23 June 2006 as part of the column "Look South". Copyright Brandon Hamber.
Posted by Brandon at Friday, June 23, 2006 No comments:

As the soccer World Cup invades our TV screens, there is only one topic worth discussing at this moment in time, and that is, of course, football.

Over a billion people will tune into the tournament, driving nonfootball fans crazy as the worldwide soccer fiesta sucks up airtime and drives people, well, largely men, to levels of hysteria. The International Association of Football Federations, or FIFA, estimates that there are over 200-million active soccer players in the world. The World Cup will reveal that there are even more football aficionados keen to bellow their advice at television sets whenever the opportunity arises.

Experts, however, believe it is not advice, whether ill-informed or fuelled by alcohol, or even raw talent, that determines your nation’s chance of success in the World Cup but, rather, economics. The World Cup and Economics Report 2006, compiled by Goldman Sachs, argues that wealthier nations are generally better footballing nations. Six of the G7 countries are now ranked in the FIFA Top 20. The US and Japan are now both in the Top 20, despite being slow off the mark when it comes to football. That said, the report does make some caveats, noting that, globally, a pure economic analysis does not always hold true. Factors such as the number of males between 16 and 35 and the size of a country might be equally good predictors. Brazil shows that size does matter. Nigeria shows that a little cash might help. The report notes, however, that, regionally, economics certainly does seem to be linked with more successful footballing nations. In Europe, the largest economies have continually spawned more victorious teams.

A broad economic analysis might help explain South Africa’s rather dismal rating of 53rd in the world, but it fails to explain how it is only ranked tenth in Africa, despite being one of the richest countries on the continent. I do not wish to get into the intricacies of football politics in South Africa, as I value my limbs but, clearly, the country is not reaching its potential.

So is money the problem? If the economy soared, would South Africa’s footballing prowess increase? When the World Cup comes to South Africa in 2010, the country would have spent about R15- billion fixing up stadiums, roads and airports. But an estimated R21-billion will come back into the economy. Some R13-billion will be generated in direct spending and approximately 159 000 new jobs will be created, says consulting firm Grant Thornton. If there is any truth in correlation between economics and footballing success, then this should give some, albeit short-term, impetus to South Africa’s 2010 prospects. But, of course, life is not like that and football, like most things, is not science. When I was six years old, I had my greatest football triumph. As I attempted a blistering kick towards the goal, my boot managed to loosen itself from my foot and take off aimlessly through the air. The ball went nowhere, but a gaggle of boys rushed enthusiastically after my boot, none- theless. Needless to say, it was a great disappointment for them to discover my scuffed boot rather than a ball when the dust had cleared. Strangely, however, when the boys ran off to chase my boot, I was left alone with the ball. If I had been less concerned about dirtying my sock, I probably could have scored. So I see two options. Either you place a bet on one of the wealthy nations this year, win and then invest that in a developing nation to make soccer more interesting. Or take a flutter on Ghana or maybe Iran because unlike money that can trap people behind impenetrable class barriers or condemn countries to the bottom of the football barrel, you never can rule out luck, or at very least the hand of God.

This article by Brandon Hamber was published on Polity and in the Engineering News on 9 June 2006 as part of the column "Look South". Copyright Brandon Hamber.
Posted by Brandon at Friday, June 09, 2006 No comments: