Launch of the Consultative Group on the Past Report 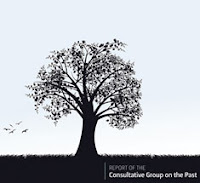 Today the Consultative Group on the Past launched its report, here is the speech at the launch. The launch itself was marked by controversy. I was present and it was all very calm until various victims groups started an argument about the recommendation for a "recognition payment" to all the victims of the conflict. The scenes were actually fairly distressing and the launch was delayed for some time (see BBC footage). The whole affair has left the future of the report in doubt. Although the recommendation payment is only one of 30, no doubt controversy will reign.

Healing Through Remembering, which I Chair, released a press statement before the launch. It is below.

Kate Turner, Director of Healing Through Remembering says “What we need is measured and reasonable debate on these issues. The experience of HTR is that honest inclusive debate in an appropriate environment can bring agreement on reconciliation, truth and justice by those who hold opposing views and opinions.”

Brandon Hamber, chair of Healing Through Remembering says “The report offers an opportunity to genuinely engage with the difficult issue of the past. Few places have consulted so widely in their deliberations on such issues. We should not squander opportunities for dialogue on these thorny issues on the back of political posturing. Let’s debate the recommendations and try and find a measured way of taking this issue forward.”

Healing Through Remembering continues to enable deeper discussions, forums and events on how best to deal with the conflict in and about Northern Ireland to build a better future.
Posted by Professor Brandon Hamber at Wednesday, January 28, 2009 No comments:

There is a saying in cricket that, if you are going to go for a big, shot go at it hard. This might sound obvious, but there is a tendency among batsmen, even when deciding to play a specific shot, of not committing to it fully, in the hope that they can prevent themselves from making a mistake as they strike the ball. But it is often hesitation, coupled with a lack of confidence, that can be a batsman’s downfall.

So what has this got do with what I learned in 2008? Let me explain.

The year 2008 will be remembered for the collapse of the global economy, with giants such as Lehman Brothers going under. But it was also the year of the bail-out, with governments pouring trillions into failing banks. Apparently, without the bail-outs, a ripple effect could have ensued, destabilising the entire economy and resulting in mass unemployment.

So the lesson is that, if you are going to undertake a business venture, do it on as big a scale as possible. The more people tied into your transactions and borrowings, the more likely someone will come to your aid. Being in R1-billion debt is not too different to being in R1 000 debt if you cannot pay your dues. In other words, and paying homage to McDonalds, if you are going to go for it, go large.

Robert Mugabe has successfully employed the 'go large' strategy too, coupling it with a passionate belief that he is doing the best for his people. But Mugabe, in the words of blogger and UCLA professor Mark Kleiman, proves that “there is no more destructive force in human affairs – not greed, not hatred – than the desire to have been right”. But believing one is right is often not based on rational thought.

Robert Burton, a neurologist and author of On Being Certain, argues that although we may feel we know something and we think it is a product of reason, this is generally not the case. Scientific evidence suggests that feelings of certainty stem from primitive parts of the brain. These parts of the brain are independent of reasoning and conscious reflection. In other words, the feeling of being right is about emotion and is a psychological state.

This suggests that we should be wary of our own belief in certainty, whether this concerns politics or economics. Sadly, however, 2008 taught me the irrational opposite. When it comes to making money and furthering a political ideology or cause, it seems that fortune favours those who believe, whether misguided or not, that they are right and pursue their goals with vigour.

At the end of 2008, the Israeli government put this into practice by killing over 500 people (most of them civilians) in ten days, apparently to prevent Hamas from sending rockets into Israel. But, according to journalist Robert Fisk, Hamas's home-made rockets have killed just 20 Israelis in eight years, making the response savagely disproportionate. Of course, Israeli deaths are a tragedy too, but the overwhelming force used by Israel, besides other factors, seems to have stunned the international community into silence.

So this is my advice for 2009: whatever you decide to do, do it with the force of a hurricane and the confidence of a prizefighter, who cares nothing for consequence. The world likes single-minded arrogance, or at least does not act against it and sometimes even rewards it.

Fly as high as you can in 2009 and forget about bombed children, unemployed labourers and those with cholera in Zimbabwe because, after all, falling from 100 m has the same result as crashing to the earth from 100 000 m. What is more, flying at 100 000 m with gay abandon is a lot more exhilarating and seemingly no one will try to stop you, in case they crash and burn too.

This article by Brandon Hamber was published on Polity and in the Engineering News on 15 January 2009 as part of the column "Look South". Copyright Brandon Hamber.
Posted by Brandon at Thursday, January 15, 2009 No comments: