Below is a live tweet record by @BrandonHamber of the panel discussion at the International Congress of Psychology 2012 in Cape Town.

The panel began with the screening of Doctors of the Dark Side followed by a discussion on the ethical issues facing psychologists given the controversy about psychologists involved in interrogations at Guantanamo Bay, and the American Psychological Association (APA) stance on the issue.

10:04am
Just watched Doctors of the Dark Side. Films about role of physicians and psychologists in detainee torture ow.ly/cxoC9 #icp2102

10:05am
There is now a panel discussion on the issue of torture and psychologists role in allowing it to happen #icp2012

10:07am
London notes the failure of accountability is striking for psychologists who oversaw torture in Guantanamo Bay #icp2012

10:08am
Failure to hold health professionals accountable will result in abuses in the future says London #icp2012

10:09am
London says at least 29 doctors reported for involvement in apartheid, only one ever investigate #icp2012

10:11am
Stephen Behnke adresses accountability from APA perspective. Says we cannot do anything about non APA members #icp2012

10:12am
Behnke says organisations have a responsibility to offer support to psychologists in these difficult positions #icp2012

10:14am
APA made a list in 2007 of practices that are forbidden including water boarding. APA took to long to do that says Behnke #icp2012

10:15am
When to know when to pull out of a situation or not is a difficult issue says Behnke #icp2012

10:16am
Behnke uses the death penalty as an example. It is legal in US, APA has intervened to prevent it in some cases #icp2012

10:16am
But it is difficult to know if we should pull out entirely or if we should have intervened in some cases says Behnke #icp2012

10:18am
Discussion very polite so far, does not capture the massive tensions in the APA there have been over the years on this issue #ico2012

10:24am
Wessells says we need to think systemically because torture is an issue that is still not over, there are systemic pressures #icp2012

10:25am
After 9/11 in US a distortion of issues and psychologists were not immune from the images and manipulation of Bush administration #icp2012

10:26am
George Bush distorted the nature of law about torture #icp2012

10:27am
No laws should throw out human rights says Wessells. Human rights standards have to be above national law #icp2012

10:28am
Wessells says we need support for whistleblowers and accountability #icp2012

10:28am
Torture does not happen because of bad apples, systemic and enabling factors need to be addressed says Wessells #icp2012

10:29am
A coalition of all psychology associations is needed that rises above our own membership and offer moral guidance says Wessells #icp2012

10:34am
It was unethical for psychologists to be at Guatanamo Bay because it was decreed beyond international standards says Wessells #icp2012

10:35am
Floor getting heated, someone saying that surely we should have just been out of this altogether #icp2012

10:36am
Another person from the floor asks if the APA should apologise for any of its actions #icp2012 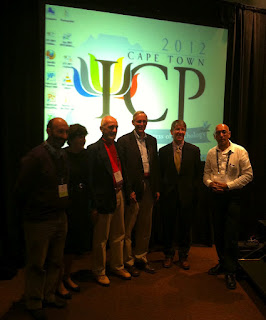 10:37am
Nora Soveass from UN Committee of Prevention of Torture raises the issue that convention also talks about prevention #icp2012

10:39am
If there are no rights in an area, like the ICR not being allowed into a place, we should no be there says Sveaass #icp2012

10:40am
Behnke now speaking. Says he agrees with Sveaass. There are no exceptional circumstances #icp2012

10:41am
Behnke says the Bush memos on torture were horrific #icp2012

10:42am
Behnke says APA was too slow, we took too long. But as we move forward, never again will US psychologist be involved in this #icp2012

10:45am
Wessells on again says Sveaass reminds us that the specificity of what was happening in Guantanamo was known #icp2012

10:46am
We need to do an honest retrospective and admit that big mistakes were made, we need a broader vision and not tinkering #icp2012

10:50am
Another question what is being done to prevent this from happening again #icp2012

10:47am
Behnke: APA is clear. No torture or involvement in this, and clear psychologists have to report torture if they're aware of issues #icp2012

10:57am
Behnke says he agrees with Wessells we need to think systemically #icp2012

10:57am
But Behnke says APA has not agreed about the issue of where we should be or not be, that is more controversial in the organisation #icp2012

10:58am
Leslie London says international human rights law is our benchmark, without that we end up asking how much torture is torture #icp2012

11:00am
Wessells says as long as we use language like do what is safe and legal its a problem, we need ethics that transcends national law #icp2102

11:05am
Paul Kimmel ends and says we don't need lawyers but we need to be humanists, and go back to that to prevent torture #icp2012

11:06am
Umesh Bawa, Chair from South Africa says we must remember we have said never again after Nuremberg and there was Rwanda etc. #icp2012

11:07am
Bawa notes that there is continuing torture around the globe and calls for us to remember that as it is going on #icp2012

11:07am
Bawa says we have to commit ourselves to defending human rights in all situations #icp2012

11:08am
Panel ends. Will it make a difference? I don't know? Better we have it, but so much to be done and is the system as Wessells notes #icp2012

11:30am
Here is a piece "The Ghost of Jeffrey Benzein Lives On" that I wrote about torture and professionals a while back, read here.

11:44am
The discussion on APA and torture still bouncing in my head #icp2012

11:45am
The more I think about it the more ridiculous the notion of lists of acceptable and unacceptable practices seem to me #icp2012

11:46am
The fact 'torture' lists are needed suggests a moral and ethical vacuum at the core of the APA and training of psychologists #icp2012

11:47am
Mike Wessells is correct there is a systematic problem in the profession and wider society #icp2012

Coalition for an Ethical Psychology

Timeline of APA Policies and Actions

I have now finished my presentations at the 30th International Congress of Psychology (22-27 July 2012) in Cape Town. On Monday 23 July 2012, I hosted a symposium at 11am, entitled "From the individual to the collective: Exploring social transformation through psychosocial Interventions". This symposium reported on the findings of Trauma, Peacebuilding and Development project with various authors of the case studies speaking. I will also presented, with with Dr Elizabeth Gallagher our research on "Youth, masculinity, the past, and conceptualisations of trauma in post-conflict Northern Ireland". We hope to have a book about the project out next year.

Yesterday, the 24th I was part of a symposium focusing on the issue of reparations after violent conflict entitled "Surviving gross human rights violations - exploring survivors' experience of justice and reparation". My paper was entitled "Healing political wounds: The role of macro interventions in assisting victims of political violence".

An audio clip of my introduction is available here: Audio Clip (3 Minute Introduction)

The main points, as tweeted were:

Posted by Professor Brandon Hamber at Wednesday, July 25, 2012 No comments:

The Northern Ireland Troubles in Britain

My paper will be entitled 'Symptomatic treatment: The challenge of policy and practice interventions aimed at assisting victims of the confict in and about Northern Ireland'.

I am still finalising my paper but here are some tweets from the day to give you a little flavour.

@JoDoverWork 9:14am Preparing to chair a session at the Brighton conference with @BrandonHamber about policy & practice for assisting victims of the 'Troubles'

@BrandonHamber 11:39am My paper at Brighton conference entitled "Symptomatic Treatment" argues we are medicalising how we look at victims of the conflict

@BrandonHamber 11:41am We also need link in truth, justice and reparation, and describe the context now and then, to deal with the full range of needs

@BrandonHamber 11:42am What victim voices are we silencing or rewarding in peace process Northern Ireland, is there social space for people to still be angry?

@BrandonHamber 11:44am Victim healing comes not only in the therapy room but how they negotiate victims place in society and acknowledge what has happened

@BrandonHamber 11:45am There is an onus on political leadership to create a framework to talk about the past in Britain and Northern Ireland

@BrandonHamber 12:00pm Good response to my talk. I'm working on the final paper. But many of the ideas in my book "Transforming Societies" ow.ly/1OgxPr
Posted by Brandon at Friday, July 13, 2012 1 comment: 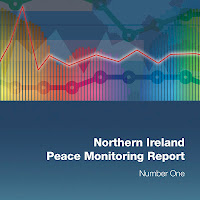   Important event earlier this year and only getting around to provide links to it now, that is the launching of the "Northern Ireland Peace Monitoring Report: Number One" written by Paul Nolan (Feb, 2012).

The NI Peace Monitoring Report will "provide independent monitoring of Northern Ireland’s journey out of violence, and of the efforts to create a society in which all can live free from fear, and in relationships of trust and safety with their fellow citizens. An indicator framework will be created to allow the measurement of change towards the goals of equality, social cohesion, sharing, and the ability to deal with political difference through open dialogue and accommodation. The findings will be made available to all through the publication of an annual report".

The real value will be in the publication of subsequent reports to see if the monitoring of the data provides useful indicators of progress in Northern Ireland or not. Download the report.
Posted by Professor Brandon Hamber at Monday, July 09, 2012 No comments:

I was going through my old blogs and noticed that back in 2004, and several times thereafter, that I complained about the fact that the South African TRC report was not available freely. At the time there was a problem with the publisher who the TRC sold the rights to. However, I am happy to report now that the TRC report is available online via the Department of Justice. On the site you can review its contents.

I have created a handy zip file with the entire report in it, download the full SA TRC Report (18MB, zip, pdf).

The Irish Open and the Union Jack (Photo)

For more photos of Irish Open, rain and umbrellas, click here.
Posted by Brandon at Tuesday, July 03, 2012 No comments: