Place or national identity and affinity for strangers

I realised recently how fickle I am. This happened while watching the 2011 US Masters golf tournament on TV.

Going into the last day, 21-year-old Northern Ireland prodigy Rory McIlroy was leading and it looked like it was going to be a dream win for the young man. But he then fell apart, slipping despondently down the leaderboard. I felt my heart sink.

However, suddenly, South African national Charl Schwartzel emerged from the pack and snatched the tournament and the coveted Green Jacket. My mood lifted instantly, and I found myself filled with national pride.

My rapid shift in mood and allegiance are, on the surface, easy to explain. After all, I am a South African living in Northern Ireland, and it makes sense that I feel some sort of affinity for both players.

I know Hollywood, McIlroy’s home town. I have friends who are members of the golf club where he grew up playing. In fact, some of them even placed bets on him winning the British Open years ago when they saw him playing as a boy. More tangentially, I was also once on an aeroplane with the wild-haired young man (and 250 others).

As for Schwartzel, I had heard of some of his previous golfing exploits, but knew little else. He grew up in Johannesburg, as I did, along with over six-million other people. I have never shared any form of transportation with him.

So my real connection to these two individuals is spurious. My support for them is seemingly linked to some strange sense of national or geographic identity.

So, what is it about a sense of place or national identity that makes so many of us feel affinity for strangers?

Clearly, there is something comforting in feeling part of a bigger whole, especially when the whole is a nation. According to academic Anthony D Smith, there are many ways to define nationalism, including ‘the process of forming a nation’, or ‘a movement on behalf of a nation’, but nationalism can also be a sentiment or consciousness of belonging to a nation. Smith notes such a sentiment can exist without it being linked to an ideology or political belief.

Sport is one of the arenas where such a sentiment finds fertile ground. Although I see myself as a multicultural global citizen, seemingly, I am also an easy victim to some forms of national schmaltziness, especially when it comes to my country of birth, South Africa.

But does national sentiment really explain my support for McIlroy?

I now have a residential and familial connection with Northern Ireland, which probably played some part in my support for him. However, I think my support for him is probably linked more to the underdog syndrome. Most of us love the story of the unexpected winner, the small-town person made good, and when David defeats Goliath. The underdog appeals to our sense of righteousness. When the under- dog wins, we are left with a sense of possibility.

But how deep is such support?

We should never forget that supporting the underdog generally only feels good when they win. Most people like to back winners, not routine losers. During the Masters, when McIlroy started losing, the broadcasters quickly lost interest.

In this context, I am embarrassed to admit there was an even darker side to my picking sides in the Masters. Actually, I now realise, with hindsight, that it was not that I really wanted the South African or the young gun from Northern Ireland to win, but what really delighted me was that, actually, an Australian came second.

This article by Brandon Hamber was published on Polity and in the Engineering News on 6 May 2011 as part of the column "Look South". Copyright Brandon Hamber.
Posted by Brandon at Friday, May 06, 2011 No comments: 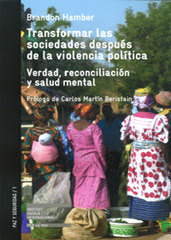 I am delighted to announced that the Spanish translation of my book "Transforming Societies after Political Violence: Truth, Reconciliation, and Mental Health" is now available.

The blurb in Spanish notes:

You can purchase the book on Amazon (UK) or Amazon (Spain).
Posted by Professor Brandon Hamber at Sunday, May 01, 2011 No comments: