Past Imperfect: Dealing with the Past in Northern Ireland and Societies in Transition 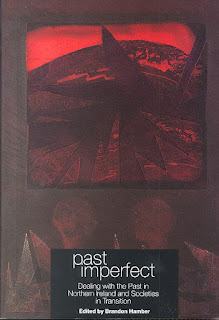 Past Imperfect: Dealing with the Past in Northern Ireland and Societies in Transition, edited by Brandon Hamber is now available free online.

This publication brings together the papers presented at the 'Dealing with the Past: Reconciliation Processes and Peace Building' Conference and draws on the ideas of the participants to further the debate about dealing with, or perhaps not dealing with, the past in Northern Ireland. Includes chapters on South Africa, Northern Ireland and Guatamala.

Sir Kenneth Bloomfield was educated at the Royal Belfast Academical Institution (of which he is a governor) and St Peter's College, Oxford, where he read Modern History. He was appointed Head of the Northern Ireland Civil Service on 1 December 1984. In that capacity he was the most senior advisor to successive Secretaries of State for Northern Ireland and other Ministers on a wide range of issues. He retired from his position in April 1991. Sir Kenneth received a Knighthood in the 1987 Birthday Honours List. In December 1997 he was asked by the Secretary of State for Northern Ireland to head the Northern Ireland Victims Commission. His report entitled We Will Remember Them was published in April 1998.

Mary Burton was born Marie Macdiarmid Ingouville in Buenos Aires, Argentina. She moved to South Africa in 1961 when she married a South African, and became a South African citizen in 1994. She has been active in human rights organisations since 1965, including the women's anti-apartheid organisation, the Black Sash. Mary Burton served as national president of the Black Sash from 1986 to 1990 and is now a trustee. She was Provincial Electoral Officer for the Western Cape Province in the 1994 general elections in South Africa. In 1995 she was appointed to the Truth and Reconciliation Commission and served on its Human Rights Violations Committee.

Mario Roberto Cabrera holds a Masters of Public Health and is also a physician. Presently he is the Psychological Restoration Area Co-ordinator for the Human Rights Office of the Archbishop of Guatemala working on The Recovery of the Historic Memory Project (REMHI) in Guatemala. Roberto Cabrera works on designing, planning and implementing the psychosocial component of the project.