Voices from the Margins: Young men and post-conflict masculinities in Northern Ireland

Brandon Hamber and Conor Murray have published "Voices from the Margins: Young men and post-conflict masculinities in Northern Ireland".
The report points to the gap (noted in the YPS Progress Study’s recommendations) on masculinity and masculine identities as part of the gendered approach to implementing the YPS agenda. This policy brief focuses attention on supporting the development of alternative and positive masculine identities. While the paper draws on lived experiences in Northern Ireland, it derives lessons and recommendations, captures stories, and offers a narrative with wider relevance for other contexts.
This is a report commissioned by Interpeace for their Outside the Box: Amplifying youth voices and views on Youth, Peace and Security (YPS) policy and practice series.
Download the Report 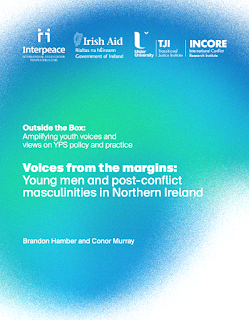 Watch a Video Summary of the Report

Posted by Professor Brandon Hamber at Wednesday, March 30, 2022 No comments:

Verwoerd, W., Little, A., & Hamber, B. (2022). Peace as Betrayal: On the Human Cost of Relational Peacebuilding in Transitional Contexts. International Journal of Transitional Justice. https://doi.org/10.1093/ijtj/ijab032

My city of gold

War in Ukraine: Drifting toward a tipping point

I’ve refrained from commenting on Ukraine on Facebook until now. There are enough brilliant experts on and in the region, not to mention lots of mainly male armchair generals and experts (and few male and female politicians in Northern Ireland) getting very excited on social media about tanks and guns they will never have to hold. So who needs more commentary, huh? So, I have a quick thought on conflict in general, which I have spent a fair bit of my life studying, teaching, and practically engaging with.
The current moment shows all the hallmarks of conflict escalation drifting toward a tipping point. I know it is not rocket science, but all conflicts have them (often multiple times) and it is vital as there comes a moment in conflicts where it becomes impossible in the short term to roll back. People think they know when this point is (because it is not rocket science!), but many protracted wars have shown most fail to spot it or an unanticipated event happens and things tip, creating an even worse catastrophe than the present.

We see classic escalation features: increasing attacks on civilians (by the Russians); constant reference to historical contexts and narratives; arms build-up by multiple players; hardening rhetoric; polarization spouted by the public, not just politicians; the public (outside the country) talking “bravely” of war and why it is needed; the silencing of anyone who utters the word peace or compromise, belittling such approaches (often using the language of masculinity); multiple alliances that are material and historical; rapid shifts in alliances (not just in the region but elsewhere, for you conflict nerds Russia changing position recently on Yemen, for example); everyone over-estimating their war capabilities and miscalculating those of their enemy on all sides; and emotions being praised before reason in the media and by us all.

I do not know where this will go, but routes to de-escalation must be found urgently. I wish I had a magic bullet for this but don’t. However, it is crucial to think about routes to de-escalation as much as we are thinking about other issues like defence. This is hard when seeing the breaching of international law and human rights violations by Russia; it’s emotive. However, this is where we are right now…drifting fast…just an observation.


Read this article on Medium

Posted by Professor Brandon Hamber at Wednesday, March 02, 2022 No comments: