Learning lessons from the Ebola crisis 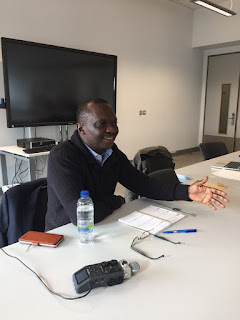 Fantastic to see my old friend and colleague from Sierra Leone, John Caulker, recently in Belfast. He spoke at an INCORE seminar on the topic of “Sustainable Peace in Post Ebola Sierra Leone”. He explained how community networks that the project John established called Fambul Tok (“Family Talk”) were used to help building community resilience in the face of the virus. Fambul Tok focuses on the  legacy of war and particularly on sharing stories about the past often from perpetrators of violence. John outlined how the community solidarity they built through that reconciliation project became instrumental in combating misperceptions and changing behaviour around Ebola. They are now looking to roll out a wider process of networks since the end of the epidemic. John was also critical of the international community who treated the epidemic as solely a medical problem failing to see that engagement of communities was needed to stop it and that communities also had to deal with the problems Ebola caused (inter-community tensions and stigma). In post-Ebola Sierra Leone problems still prevail in that funding support is for “Ebola victims” which singles people out rather than support whole communities. John believes that any interventions should be community-centric and he has proven the value of this in Fambul Tok.
Posted by Brandon at Thursday, September 29, 2016 No comments:

Thoughts of Chris Matthews in Donegal

I had the pleasure of attending the 2016 Tip O’Neill Irish Diaspora Award in Buncrana, Co Donegal on 23 September 2016. The award, which was the 5th award so far, was given to Chris Matthews. Matthews is an American political commentator and most well known for his talk show “Hardball” on MSNBC. He also served as Press Secretary to Thomas P. “Tip” O’Neill. At the event Matthews took to the opportunity to reflect on the current political situation in the US. He felt what was going on right now was “crazy”. There is a tension between Trump’s “nasty politics” and Trump selling people an unrealisable dream of “manufacturing in 1950s”, compared to Hilary Clinton as an experienced politician but being painted as “the establishment”. He also noted that when he worked with Tip O’Neill he focused on letting people “know who you are” and in O’Neill’s case that meant people could support him as his values were made more prominent. Matthews also reflected on O’Neill’s political style noting that he understood that debate was a way of moving politics forward, and that today people have forgotten this thinking debate is politics. When the debate is done compromises have to be made and the work done Matthews noted. He ended by saying that his “crystal ball is a bit foggy” about who would win the US election, but if African Americans, Hispanics and women vote, Trump will lose. But we will have to wait and see...

Posted by Brandon at Sunday, September 25, 2016 No comments:

How can technology build peace?

Very excited to be part of the Unusual Suspects Festival taking part in Northern Ireland.

How can technology help develop connections between people and places? What’s the role of digital platforms in divided societies? Join us for an innovative and interactive session exploring how technology can be used to boost and create peacebuilding, or #PeaceTech.


The Innovation Peace Labs, a new initiative created by the Ulster University, will host the session, alongside the Nerve Centre, Transformative Connections and other international partners.

To register click here.
Posted by Brandon at Monday, September 19, 2016 No comments: