Zimbabwe - not a crisis, but a little mix-up

Lately, words have been distressing me and increasingly alienating me from the world. This is because our world is now filled with words whose meaning is distorted unrecognisably. We live in the age of euphemisms.

Cars are no longer second-hand but preowned. The world economy is not in free fall but is correcting itself, with staff being rationalised, not being fired. No one sells products anymore but rather solutions. The American justice system does not poison people to death but administers a lethal injection. Civilians are not murdered by armies but are subjected to collateral damage. And who can forget Janet Jackson revealing parts of her upper body to the audience a few years ago and the act being referred to as a wardrobe malfunction?

A euphemism, according to the Webster Online Dictionary, is the substitution of an agreeable or less offensive expression in place of one that may offend or suggest something unpleasant to the listener.

But why have we become so hooked on the euphemism? Euphemisms serve multiple functions. They can shelter us from the truth, especially when it might be difficult to deal with or make us feel psychologically uncomfortable.

I recall my nephew asking, when he was about four years old, what we were eating for dinner. His mom replied, saying we were going to have lamb. He asked, "like lambs in the field?" She truthfully said yes, but he simply laughed in reply, saying, "No way." In other words, he did not believe that it was possible that lovely fluffy lambs had been recycled as dinner with mint sauce on the side. He instinctually protected himself from an uncomfortable reality.

What is remarkable about our ability to distance ourselves from reality is that this continues unabated into adulthood. Cow flesh gets converted into beef, pig meat into bacon and the poor become disadvantaged, not destitute or starving to death. This helps us cope.

Euphemisms, however, have a more cynical use that extends beyond psychologically protecting oneself from horrid realities. Politics is infused with euphemism.

George Orwell, in his novel, Nineteen Eighty-Four, talks about 'B vocabulary', that is, language "deliberately constructed for political purposes – words . . . which not only had in every case a political implication, but were intended to impose a desirable mental attitude upon the person using them".

Robert Mugabe has been using B vocabulary of a sort for years now. In the mid-1980s, he deployed the Fifth Brigade, euphemistically known as Gukurahundi, meaning 'the wind that sweeps away the chaff before the rain'. The Fifth Brigade killed thousands of Zimbabwe's minority Ndebele speakers.

Today, in Zimbabwe, the doublespeak (incidentally, a term attributed to Orwell but which, in fact, he did not use) continues. President Thabo Mbeki is still apparently engaging in 'quiet diplomacy' and Mugabe continues to use his 'war veterans' (henchmen) to terrorise the population into submission.

On the wider international stage, condemnation of the Mugabe regime has become stronger recently, but sanitising language prevails.

Following the election of Mugabe as President for a sixth term, in June, after the opposition pulled out of the running because of intimidation, a spokesperson for United Nations secretary-general Ban Ki-moon had this to say: "The secretary-general has said repeatedly that conditions were not in place for a free and fair election, and observers have confirmed this from the deeply flawed process. The outcome did not reflect the true and genuine will of the Zimbabwean people, or produce a legitimate result".

This was a welcome development, but, I think, it warrants a more honest translation. What Ban Ki-moon meant to say is: "The secretary-general is sick and tired of saying that Mugabe's thuggery has turned the elections into a sham. Observers have seen people being forced to vote for Mugabe against their will and brutal violence has been used repeatedly. The election process is damaged irreparably. The people want Mugabe out and the election outcome is corrupt and criminal in the extreme."

This article by Brandon Hamber was published on Polity and in the Engineering News on 18 July 2008 as part of the column "Look South". Copyright Brandon Hamber.
Posted by Brandon at Friday, July 18, 2008 No comments: 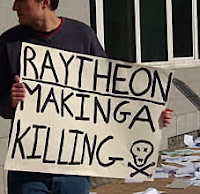 I have been following this story closely as it concerns arm manufacturing in Derry. A very active group of protestors have been running a campaign against Raytheon for some time now. This resulted in prosecutions after the group occupied the Raytheon offices. But on 11 June 2008, 6 people, who had occupied the offices of Raytheon in Derry and destroyed computers, were acquitted of criminal damage by a Belfast jury, writes Danny Morrison.  He continues: "Raytheon is a huge US arms manufacturer, with sales of $20 billion in 2006 and over 70,000 employees worldwide.  It makes Patriot, Tomahawk, Cruise and Sidewinder missiles, and much more besides". You can read the full story here.
Posted by Brandon at Tuesday, July 08, 2008 No comments: