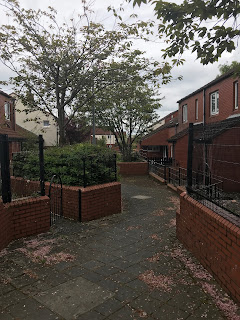 All Cartographies of Conflict project posts.
I am part of a new project called "Cartographies of Conflict: Belfast, 1969-1994". The project, funded by the AHRC and running from May 2015 for three years, assesses the impact that the Troubles had on the architecture of Belfast’s residential communities. There are many visible architectural remnants of the Troubles in Belfast, most notably the ‘peace-walls’ between a number of Protestant and Catholic communities. However, looking beyond the immediately visible we can see examples of divisive architecture within individual communities in Belfast. Housing developments, roads, landscaping and other structures completed during the period of the Troubles continue to divide and fragment communities. For example, streets that once provided pedestrian and vehicular access to services were closed off or restricted through the erection of barriers, landscaping or the placement of new housing. Many of the open terraced streets that formed the fabric of the inner city were redeveloped in the form of inward looking cul-de-sacs. These changes to the architecture of Belfast have changed the city’s appearance and have had an impact on how people move around their immediate areas.

The main aims of the project:

• Identify the relevant architecture throughout the city.
• Engage communities to attain detailed information on how people interact with this architecture.
• Use the research and engagement to inform policy discussions nationally and internationally. 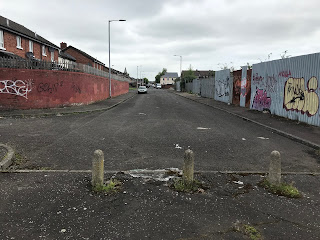 The project consists of a city-wide study of Belfast’s relevant Troubles era architecture in order to gauge the extent and impact of the changes to the built environment that occurred in the period, and that continue to have an impact on the daily lives of the people who live in the areas. Firstly, the relevant architecture was identified through research and consultation with the local communities in six case study areas. These residents were engaged in order to find out what people actually think about this ‘divisive architecture’ (or what we now call "hidden barriers") and how it affects their daily lives, if at all. The research will then be used to help inform policy discussions relevant to the areas and the issues they face. Finally, the lessons for other communities nationally and internationally are being considered from the research and engagement carried out as part of this project.

See all the posts and activities about Cartographies of Conflict project.
Posted by Professor Brandon Hamber at Friday, May 01, 2015