For some light relief, here is a short piece I penned on Halloween night...
Turns out the story of Halloween is somewhat like the story of the grey squirrel. Brought to the UK and Ireland from the US in Victorian times as living-ornaments for the wealthy, the adaptable and competitive grey squirrel has thrived contributing to the decline of the indigenous red squirrel. If you asked a child in Ireland to draw a squirrel more than likely, they would pen a grey rather than a red squirrel. Conversely, Halloween, now considered the most quintessential of so-called US consumption holidays, was a late import to the US from Ireland. But the US tradition has now overtaken all others.

I was first alerted to the origins of Halloween by my wife, who is from Ireland, and told me that Halloween originated in that part of the world and as a child they carved turnips rather than pumpkins. Being of a sceptical mind, I thought this was a tradition peculiar to her home town of Derry or alternatively simply the practical outworking of the fact that fat American pumpkins are not common in the local environs. Then I did a bit of research. Turns out the turnip really is linked to the root of Halloween and not the pumpkin.

Read the rest of the article on Medium.com

Our 2020 Halloween Turnip For some light relief, here is a short piece I penned on Halloween night... Turns out the story of Halloween is so... 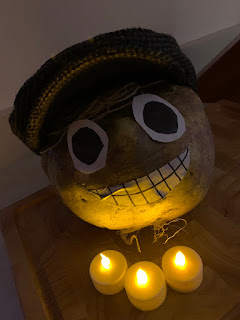