As it currently stands 93% of children in Northern Ireland are educated in either Protestant or Catholic schools. Only 6% of children go to integrated schools.

In the film below, Professor Alan Smith of the UNESCO Centre at the University of Ulster discusses the findings of new research into integrated education in Northern Ireland. The report exposes a gulf between political thinking on education and the public appetite for integrated schools in Northern Ireland.  The report shows a clear trend in party manifestos and policy, moving away from the concept of integrated education even though there is continuing, strong public support for the idea. The report – Integrated Education: A Review of Policy and Research Evidence 1999-2012 — was written by Ulf Hansson, Una O’Connor Bones and John McCord and was commissioned by the Integrated Education Fund (IEF). 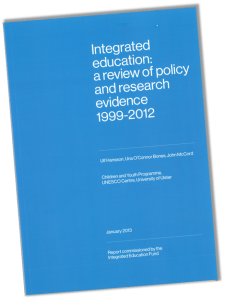