The field work from the AHRC Project "Screening Violence: A Transnational Study of Post-Conflict Imaginaries" with partners in Newcastle and Bristol Universities, and works with co-investigators and partners in Algeria, Argentina, Colombia, Northern Ireland and Indonesia began this month. Data collection was undertaken in partnership with the Nerve Centre which included the screening of the Colombian film "Falsos Positivos" (see details). A focus group discussion took place following the film to engage the "social imagination of violence". 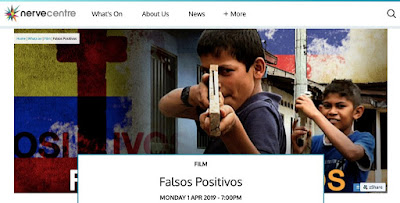